The online markets have many options for fans, but the question that we have attempted to answer here gives more air. Read ahead to know more. 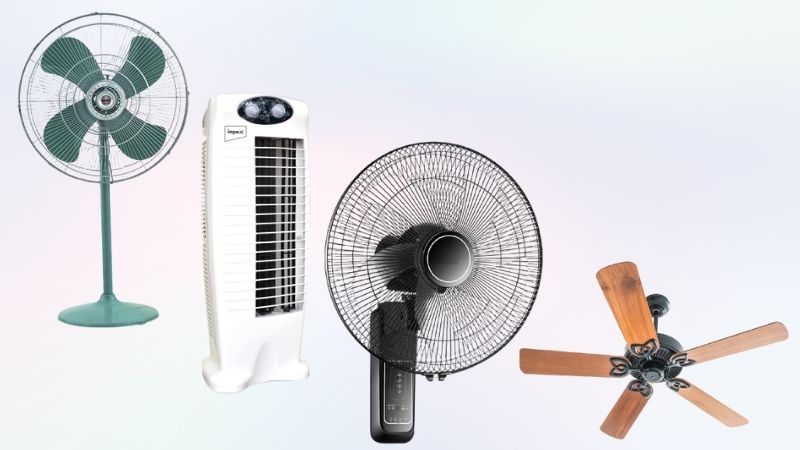 Fans are machines thought to keep us cool in hot and humid weather, but in reality, their function is not cooling a room. In essence, they are meant to help the air circulation in the room by inducing a breezy effect that can make you feel relaxed and comfortable. It works on the simple principle of increasing the airflow that passes the moisture across the room and helps in evaporating the sweat.

What Are the Factors Affecting the Performance of a Fan?

The cooling impact of the fan can be assessed in terms of how well it performs the job of circulating air through the room. The most common factors that you need to consider here are the fan size, the space that the fan has to cover, the distance between the ceiling and fan, the tilting angle of fan blades, and finally, the fan's speed.

For instance, the blades of ceiling fans are found in different forms. Even though these factors are pretty fundamental when it comes to their cooling performance, they can also bring about some difference in the noise generated. In general, ceiling fans don't impact the performance of ceiling fans. Let's take a look at the common types of fans and see which ones give more air.

Pedestal fans are generally standing fans offering a comparatively more minor sweep. As a result, it can cover less space in an enclosed space. However, with rotation along the central rod, the fan can cover more area, leading to intermittent airflow in several directions. These fans are generally placed in a specified location or corner of the room. Therefore, pedestal fans can create good airflow in small areas to cool down in a particular part of the room. Pedestal fans also consume around 50 to 55 watts on several levels.

Tower fans are equipped with a host of advantages. In the first place, these fans are devised not to emit much noise, which is quite the opposite of other options. These fans have a tall and tower-like design for a robust and powerful flow of air. It functions by oscillating on a base, and it can distribute the air all through the room. Also, these fans generally come with an inbuilt dehumidifier and air purifier. As they are equipped with ionizers, you can hit the ionizer button for air purification. Overall, tower fans are highly stable, portable, and save a lot of space.

Ceiling fans can be found in several sweeps as well as diameters. The sweep of the fan can determine the total area that the ceiling fan can cover. Regular fans, which are commonly available in the market, come with a 1200 mm sweep, but you can find other sweep options as well. Ceiling fans typically cover more area and give more air since they are generally placed at a central location in the ceiling. These fans tend to consume 70 to 85 Watts. Those fans that come with similar wattage may also have smaller sweeps.

Wall-mounted fans are highly suitable for air circulation in small and constrained spaces like kitchens, studio spaces, office cabins, and so on. This is because these fans help in pushing the air away, thereby improving circulation. Another reason why these fans are famous is that they do not cover a lot of space. In addition, these fans generally come with aerodynamically designed blades for giving greater and speedy airflow. As a result, wall-mounted fans are excellent choices for both domestic as well as commercial purposes.

Now the question that still needs to be answered here is which fan gives the most air. Honestly, the one with the highest RPM would provide the best airflow, but we are not here for such simple answers, right!.

Now the thing is, there is no doubt that ceiling fans give the best air throw; actually, they have the best coverage. However, they might not be suited to every area. So if you are looking for spot cooling, then your requirement would be different. Pedestal fans are more suited to every purpose, in our opinion. They come in variable speeds, and the tall ones can make you blow away with the kind of air throw they have.

In the end, it is all about your needs and restrictions. We have put our opinion on the platter, and now it is up to you how you see things from here.

As you can see, the type of fan that will suit your purpose is dependent on various factors like where you want to place the fan and the space it has to cover. For instance, pedestal fans are highly suitable for large areas, while tower fans are suited for less space. Also, both these fans are significant in terms of mobility and space-saving capacity. And if you are looking for broad coverage, then ceiling fans can give the maximum air flow in a room.

Our goal at Lifestyle Titbits is to provide you with practical information that you can use to live a happy and fulfilling life. Follow us to get valuable material that will help you live the life you deserve.