You are here: Home > Titbits > Oral Care > When to Use Mouthwash – a Comprehensive Guide

When to Use Mouthwash – a Comprehensive Guide

Mouthwashes are of various kinds and it depends on you to get the one that matches your requirements. Some help you get fresh breath and some assist in destroying bacteria and other germs. 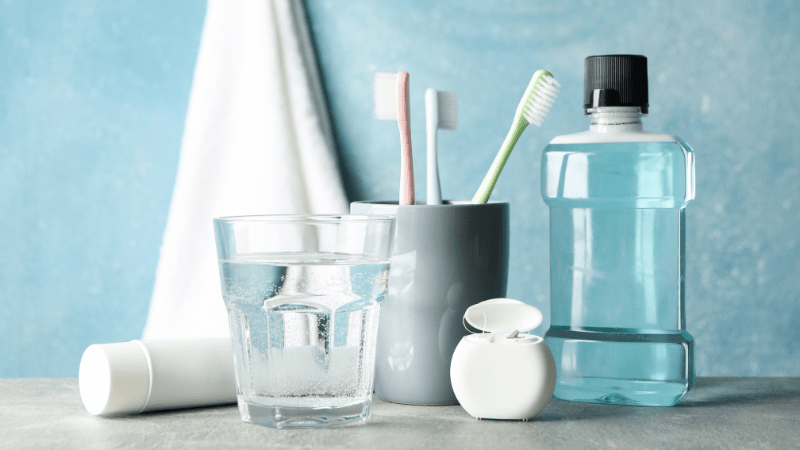 Mouthwash or oral rinse is a fluid material that is meant to wash your teeth, gums, and mouth. It typically has an antiseptic in it to destroy microbes living between your teeth and on your tongue. Mouthwash is used by several people to combat foul breath, while others utilize it to try to avoid gum disease.

In regard to oral health, mouthwash isn't a substitute for brushing and flossing, and it's only useful when applied appropriately. It's also worth remembering that specific product formulations include various components, and not all mouthwashes can help you keep your teeth healthy.

That being said, if you utilize mouthwash after brushing and flossing your teeth properly, certain forms of mouthwash, like fluoride washes, can effectively safeguard teeth against acids formed by plaque bacteria. If you are suffering from a fungal disorder or gum disease, your dentist can recommend a particular mouthwash.

How to Use a Mouthwash?

Depending on the mouthwash type you choose, the directions can differ. Always follow the guidelines on the box rather than what you read in a post. Below are the common directions for most mouthwashes.

Begin by brushing and flossing your teeth properly.

Wait a few minutes after brushing with fluoridated toothpaste before utilizing mouthwash. The evenly distributed fluoride in toothpaste can be washed away by mouthwash.

Fill the cup supplied with the item or a plastic measurement cup halfway with your preferred mouthwash. Use just the amount of mouthwash recommended by the product. It usually ranges from 3 to 5 teaspoons.

After emptying the cup in your mouth, jiggle it around. Avoid swallowing the oral rinse. Mouthwash isn't supposed to be swallowed and drinking it won't help.

Gargle for 30 seconds as you're washing. You may like to set a timer or mentally count to 30. Onto the drain, spat out the mouthwash.

Using an oral rinse properly will provide you maximum benefits. Always keep the following points in your mind while using a mouth wash.

Be prepared to follow the label on every mouthwash you purchase. Various products have varying concentrations, and many may suggest diluting them with water.

Note that if the mouthwash's tag does not say to dilute it, you might not get the maximum advantage if the germ-killing components are at a lower concentration.

2. Mouthwash is not a substitute

It's important to note that no mouthwash can replace a normal oral hygiene regimen that includes twice-daily brushing and everyday flossing. To preserve good oral hygiene, even though your dentist suggests or advises a mouthwash, you must also follow your regular dental hygiene regimen.

Swishing mouthwash for the appropriate timeframe is one of the steps to proper mouthwash usage. Take a look at the package to note the time. Many mouthwash manufacturers suggest that you should squish the oral rinse around in your mouth for 30 seconds before spitting it out.

When to Use Mouthwash?

Mouthwash is used by certain individuals as a portion of their everyday teeth-cleaning schedule. Mouthwash can be used to eliminate foul breath in a moment.

When it comes to mouthwash for unpleasant breath there are no strict guidelines. However, unless you utilize it immediately after brushing and flossing, it would not work to improve tooth enamel or combat dental problems. Teeth must be freshly washed before utilizing mouthwash for optimal outcomes.

Working of a Mouthwash

Based on the form of mouthwash, the response to the query "how does mouthwash work?" differs. Some products include germ-killing substances to help avoid plaque formation on teeth. Some eliminate foul breath, others have an anti-cavity advantage from fluoride.

You have many choices, and the best mouthwash for you is the one that satisfies your oral hygiene requirements for tooth and gum protection, as well as your taste preferences. Know what mouthwash offers and bear these things in mind when choosing the best oral rinse:

The components in mouthwash can irritate some individuals, particularly those with sensitive gums. Often, individuals who do not normally have sensitive gums can notice that their gums are more responsive for a brief period of time after a dental procedure.

Try using an alcohol-free or herbal oral rinse in your dental hygiene regimen if you have a sensitive mouth. Aloe vera and chamomile are popular components in organic mouthwashes because they have a calming effect.

Most mouthwashes contain alcohol, which can be dangerous if a significant amount is intentionally ingested. If you're looking for mouthwash for the entire family and your house contains young teens, you might like to look into the alcohol-free oral rinse options.

Furthermore, because of the risk of violence, some struggling alcoholics stop utilizing a mouthwash containing alcohol in regular oral treatment.

Search for an oral rinse that includes anti-plaque components if you need a mouthwash that not only significantly reduces foul breath but also assists in avoiding plaque formation on the teeth.

If you are not sure which oral rinse is right for you, consult your dentist to recommend the right oral rinse depending on your dental health.

Mouthwash can be utilized to clean off plaque and combat gum diseases as well as to deter or avoid foul breath. Mouthwash is not a substitute for brushing and flossing regularly. Mouthwash must be utilized correctly in order to benefit your oral health.

Practicing as a Dental Surgeon in Solan in Himachal Pradesh since 2002, Dr. Vikas Khandelwal is an ardent practitioner of holistic dental care. Apart from his love for reading, he frequently engages in upgrading his skills - some of them being implants, CDE programs, community workshops, and aesthetic/restorative work.