You are here: Home > Titbits > Home & Kitchen Appliances > What is the difference between a blender and a beater?

What is the difference between a blender and a beater?

Our research shows that a sizable chunk of Indian consumers are not aware of the differences between a blender and a beater. This is what ignorance that our post here aims to eliminate. 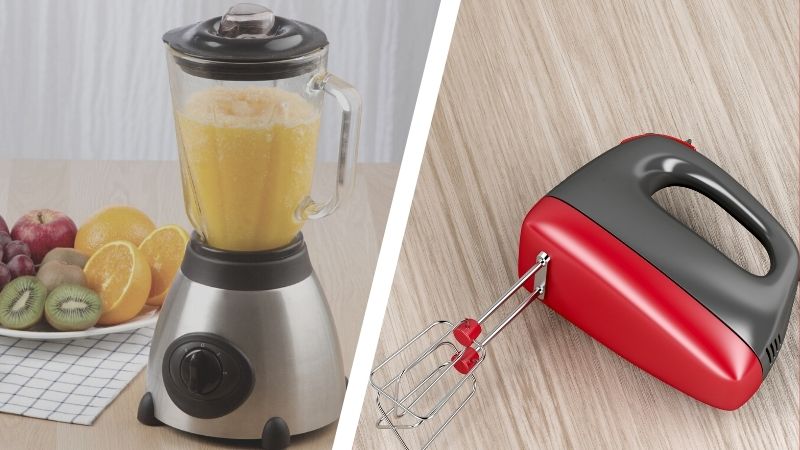 Blender? Beater? things can get confusing here quickly. You are not to blame, it is the thin marketing and ethics of the ad guys that are in question here. See, this is the misinformation that often leads to people getting confused between a blender and a beater, one probable reason can be that there is a functional similarity between the both. After all, in both cases you are mixing something. But if I still can't convince you that it is the blender that is for drinks and general purposes while the beater has to do with food then read on for more information about these two handy appliances.

Right now, when you want to make a smoothie or milkshake at home you would probably be using a kitchen appliance to get it done, that appliance is a blender. What we have mentioned above till now is a very vague explanation of things, time to get serious now!

Blender Vs Beater - What's the difference?

Read the words "Blender" and "Beater" carefully, you will begin to get the idea. Blender as the word goes is more suited to blending things. By things we mean your food stuff! From your basic cocktails to your yogurt smoothie, the device you would use to mix all the ingredients perfectly is the blender. It looks different from a beater also.

An electric beater has generally two prongs attached to a motor and is best used for beating and whisking of food stuff. If you wish to know more about its practical application then feel free to read our:

These articles will explain in detail the actual use of this wonderful category of appliance as well as the best ones that you can buy online to make your culinary life a little bit easier.

We actually love electric beaters that's why we have reviewed them deeply on our site. If you ask us about Indian cooking, owning a beater makes way more sense than owning a blender. We will tell you why.

See, a blender is slimmer and has a single protrusion with small fan-like blades in the end. Being very Indian all that we could use it for was for making lassi and shikanji. For anything else, electric blenders are too under powered for Indian liking and cooking utility.

Let's move further to understand these two appliances. Blender here could be a hand blender or a proper blender.

What you see above is a hand blender, we are putting images here to shed confusion. Move on there are more pictures to be seen.

This is your regular home blender, which in Indian lingo is often referred to as a "mixie". So just remember one piece of wisdom here, what we call mixie is actually a blender. Now, there are many variations of the same device in the market and often you would see an electric food processor doing all the duties of a blender, beater and other stuff. That is another ball game which we might address soon. For now let's focus on blenders and beaters.

Now this is an electric beater. If you have read our post so far, you would at least know the visual differences. So, by the looks of it you would be able to tell the difference between a blender and a beater, but things should always be above mere visuals right!.

More often than not, We the Indians have a habit of buying an appliance out of whim. We will buy it because it looks jazzy only to find out later that things are not shaping in the way we wanted them to. What we mean by this is the fact that a huge population in our country is actually not aware of the full potential or the functionality of the kitchen appliance that they have just purchased. We don't want our readers and followers to meet the same fate, that's why we are here to shed every ounce of confusion so that you only buy the appliance that serves utility and adds value in your kitchen.

A blender can be used for

A beater can be used for

On the surface the similarities between the two appliances are great, however you have to be the judge of your own needs. Just drink a glass of water and take a pen and paper. Jot down what you need out from your blender/beater. Check it against our articles and we are sure you would land-up with the right appliance for your kitchen.

Our small blog post was aimed at shedding the confusion that anyone might have with a blender and a beater. We expect our readers to use the information for their benefit. All you have to do now is to jot down the expectations you have from your blender or beater, then decide which one to go for. We sincerely hope that you will be able to get the right appliance for your needs. Do follow our blog posts to live the healthy, meaty and fun filled life you deserve.

Our goal at Lifestyle Titbits is to provide you with practical information that you can use to live a happy and fulfilling life. Follow us to get valuable material that will help you live the life you deserve.